It's time to Look up -- Throwback warning!

Well here it is, the weekend before finals. We're slaving away in front of our computers, listening to music through our Dr. Dre headphones off a playlist of over a thousand songs on our phones. Plus, to keep in tune with the last post of "procrastination" here I am. Procrastinating studying for my Business Law and Financial Accounting finals. They're not till tuesday! I'll be fine...after I study for the Macroeconomics, World Religion and Organizational Behavior finals I have Monday and Wednesday...oh dear.

I'm calling myself and others out. I saw this video going around facebook a while back, and it's since fallen silent. However, I had saved it for some reason and now it's time for me to speak on it.

Coming from someone who is writing a blog on the world wide web, we have access to technology like no one could have ever fathomed before. Sometimes I wonder though, what would it be like if we lost the use of all technology? Not in the sense of "lets all go to Hogwarts and become witches and wizards" although if that ever became an option I may be the first to give up my precious iPhone. I simply mean if all technology ceased to function...could we function at all?

Watch this video. Think about it. Then keep reading if you wish.

To avoid sounding like a completely hypocrite, I dare, and will at somepoint in time go 3 days without using my phone. This is a mere 72 hours without the portable communicator/map/dictionary/camera/game device that has become glued to our hands.

We really have become completely attached to these things haven't we?

If anyone knows me, I'm the WORST when it comes to my iPhone. It has basically become a part of my being, and anyone can reach me at (almost) any time of the day. It saves memories, it keeps me connected to family, it even gives me a chance to keep in touch, in real time, with someone I haven't seen face-to-face in over 15 years. Wow. Technology has really moved us forward in SO many ways... 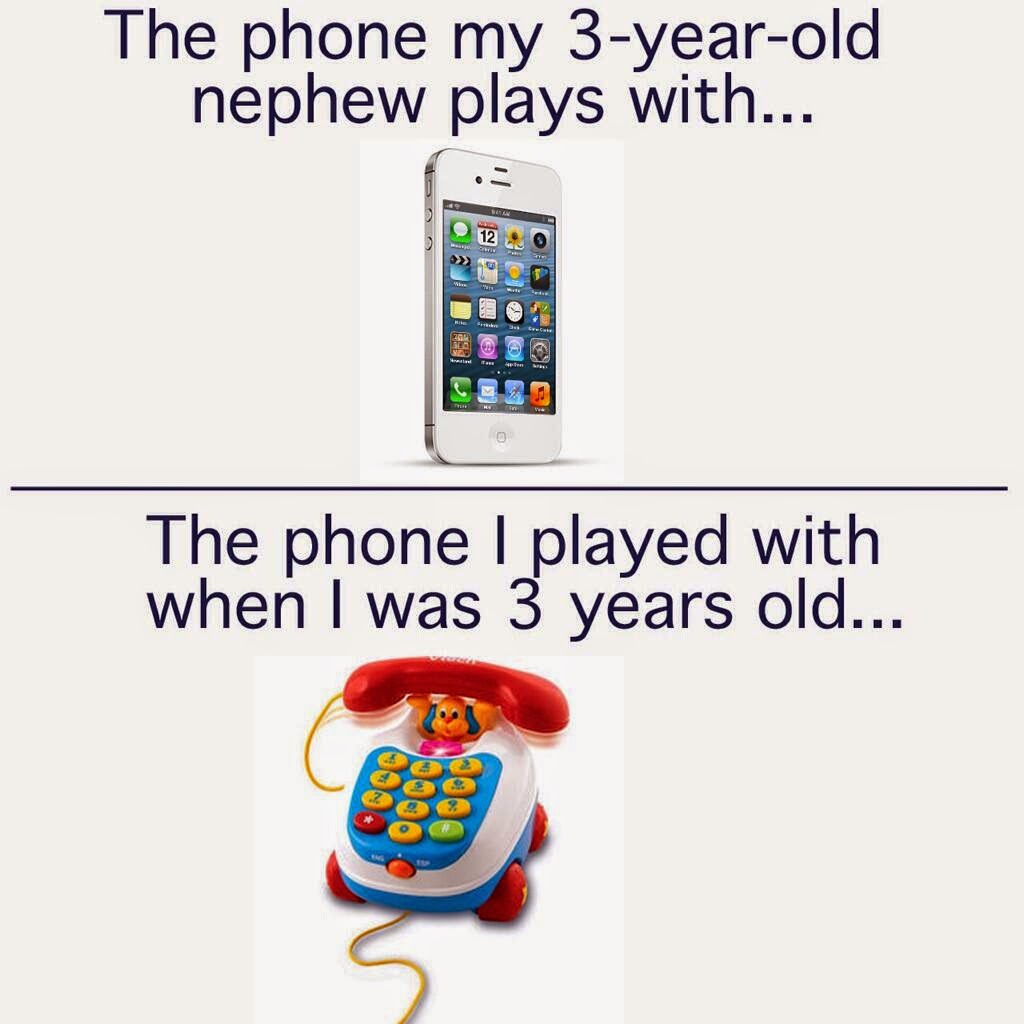 In all seriousness, what happened to our imaginations? At only 23 years old, I remember the fast expansion of cell-phones. However, what seems "old" to me isn't even the beginning. What happened to when we didn't need a cell phone to be happy?

As a kid, I had swimmer barbies, and fashion barbies, and doll houses and barbie cars...I was an only child gimme a break!...but I also would act out TV shows. There were real life and cartoons that my friends and I would become the characters (fighting over who got to be who obviously) and made capes from towels and magic wands out of a pencil with a ribbon tied to the end.

We played mermaids in the pool and called out the person who separated their feet and banned them to the shore line because they had broken mermaid law.
I loved my skip-it (even as a child I hated running).
I played with rollie-pollie bugs and built them castles made of pebbles. Though they didn't seem to appreciate it very much...always crawling out of the corners and disappearing into the grass...

Don't get me wrong, I LOVE my water proof, drop proof, shatter resistant digital immediate viewing camera! Okay, love may be a strong word but it works in this situation. A friend of mine recently got a "New" camera. It prints out the photos for you RIGHT THERE and you don't even have to put them on your computer!!! NEATO! There's pictures of RANDOM things all over the walls now because the thing is so big she can't put it in her purse to forget she has it. It's really nifty.

Please tell me everyone caught the sarcasm.

It's basically the old Kodak camera, that prints out pictures that you have to wave around and hope there was enough flash to make it show up. Honestly, I'm all about the throwbacks. Anyone who has ever heard the music on my iPhone, don't be surprised if some old N*Sync shows up, and even less surprised when you hear a Beatles tune. The original one. Not remixed.

But Seriously, take a minute out of your busy final studying schedule and just look at this video. It may open your eyes.

Let me know if anyone ACTUALLY does the challenge of going 3 days without your phone. I would say technology in general but...well I wouldn't want anyone to become a hermit and actually read a book for once. xD

Until next week!
--Mary
Posted by Unknown at 8:11 PM No comments:

Procrastination at it's finest

Once again, here I am pointing out how AWFUL of a blogger I am when it comes to keeping things updated. I'm going to get better at this I promise. Once a week!
This WILL become the new norm.
This WILL become a habit that is part of me.
At least that's the aim.

How long has it been?

My boyfriend even put an alarm on my phone that goes off every other Saturday to remind me to make a blog post. Well folks, it's time I stop procrastinating, and start listening to that alarm!!!

If it's facebook, or pinterest (guilty) or that new discount shopping site you just found that's keeping you from doing what you're supposed to be doing...well I have to say I understand. If I can find anything to do other than what needs to be done, I'm more than likely going to do that.

Unfortunately, I've learned the hard way that just because you don't want to do something, doesn't make it go away. Just because you don't feel like doing the dishes, doesn't mean you'll have a clean bowl to eat out of in the next half an hour when you decide that devouring a bowl of cheerios you shouldn't be eating sounds a lot better than writing that paper due tomorrow morning which is the reason you thought about washing the dishes in the first place. It's a dangerous cycle.

We've all been through it. I even downloaded one of those procrastinator apps for my computer some of which can be seen HERE
Seriously. Check some of those out. They can be really helpful. or at the very least mildly entertaining.

For those of you reading this post, because you are procrastinating doing something else, congratulations. You've made it this far! Here's a picture of Gandalf drawn into a suede chair. 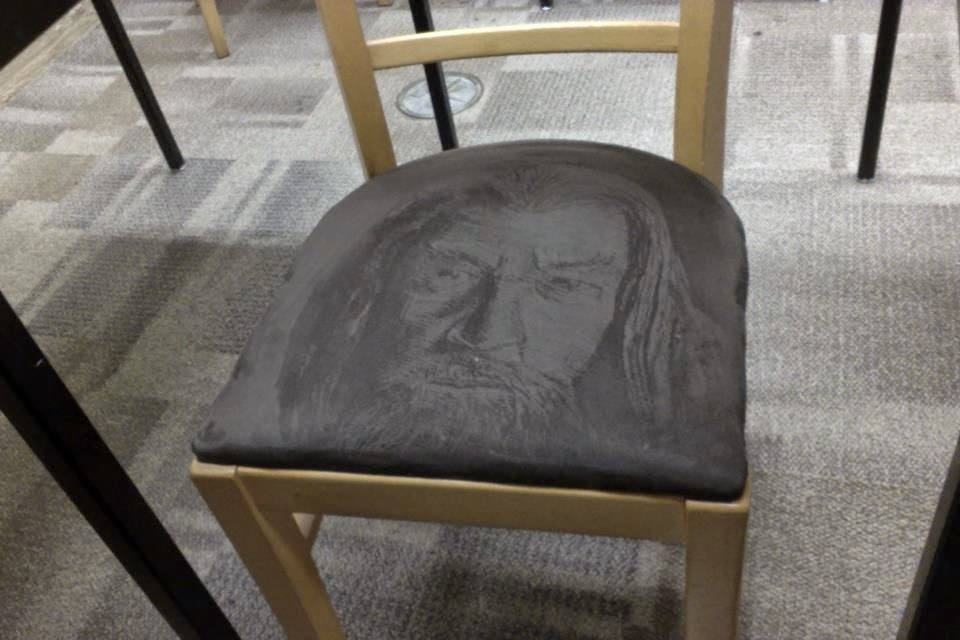 Don't ask where I found this picture.

Procrastination of a five page case study does wonders for finding random images for a blog post. *follows link provided above*

Let me know if there's ever anything y'all want to hear! I promise I'll update more.